The History Of The Organic Movement

The organic movement emerged in the 1960s, when public opinion turned against conventional agricultural practices. The first book to openly criticize conventional industrial farming, Silent Springs, by Rachel Carson, documented the health effects and risks associated with DDT and synthetic pesticides. In it, she also identified the emergence of commercial applications of organic methods.

Cultivating a Movement by John Obach

In Cultivating a Movement, John Obach explores the origins of the organic movement and how it has spread. Obach credits a variety of forces with helping the movement grow. Obach analyzes the various philosophies and values that shaped the movement and shows how resource mobilisation helped it spread.

Synthetic pesticides have an environmental impact

The use of these chemicals is often driven by economic considerations, but there are several risks associated with these chemicals. For example, pesticides can cause acute poisoning in humans. These chemicals are absorbed into the body and affect the human health directly and indirectly through contaminants. Concomitant exposures to other pollutants can have a significant impact on the long-term effects of low levels.

The presence of synthetic pesticides in water is a major concern because it affects both surface and ground water, which are essential to life. The impact of these chemicals is particularly damaging to groundwater because they cannot be completely eliminated or reduced in concentration. Pesticides can remain in soil for hundreds of kilometers. They can also be bioaccumulative.

Scientists use models to assess the potential toxicity of synthetic pesticides on aquatic ecosystems. Most impact assessment methodologies use the USEtox model, which was developed by consensus among toxicity assessment model developers. This model estimates the toxicity factors of a pesticide for humans and for freshwater ecotoxicity.

Organic farming is resisted by farmers

Organic farming is a system of farming that does not use artificial chemicals. The main goal is sustainability and the production of food with minimal residues. In addition, organic farming uses less energy and emits fewer greenhouse gases than conventional farming. Organic farming was established in response to rising concerns about the dangers of synthetic chemicals. Farmers who switched to organic methods faced several challenges.

Organic agriculture is not the panacea. Organic farming faces many challenges, including labor shortages as well as land grabbing by developers. Farmers can take steps to reduce their risk and increase their income. These farmers can reap the benefits of sustainable practices and a higher selling price for their products.

Bivar’s book Organic Resistance explores the history of farmers’ resistance to industrial agriculture in the post-World War II era. She explores how organic practices were influenced by different alternative anti-industrial movements, including biodynamic farming. Alternative agricultural methods were often linked to ideas of mystical and religious purity as well as a desire to be authentic. These ideas were often linked to conservative agrarianism by organic supporters.

There are many benefits to organic farming. Organic farming preserves the environment and provides economic and social benefits to farmers. It is a system of farming that harkens back to family-run farming, rejecting agribusiness orientation and allowing farmers to take control of their own destiny. By creating jobs on organic farms, farmers could help to fill the gaps in rural America’s economy.

Organic methods can be used commercially

Organic chemistry is an important tool for crop protection, pest control, and improved food provision. The world’s population will continue to grow, and so will the demand for food. Crops will also need to be produced for chemical feedstocks and renewable fuels. To maximize crop yields, sophisticated chemicals will be required.

Fortunately, there are safe, non-toxic, and environmentally-friendly alternatives to organic solvents. Water is a great solvent replacement because it is less volatile than many organic solvents. It is also inexpensive, easily accessible, and easy to handle. It may not be suitable to all types of chemical reactions.

The organic food sector has a small number of family-owned businesses, which make up a small percentage of the industry’s commercial handlers. These companies typically sell to natural product chains and independent natural grocery shops. However, some of them work with conventional farmers to transition their land to organic farming. This reduces their risk and encourages suppliers to switch to organic.

Organic pesticides are made from natural sources such as plant derivatives and living organisms. Examples include pyrethrins, derived from dried flower heads of Chrysanthemum cinerariifolium, and neem oil from Azadirachta indica seeds. However, inorganic chemical compounds are also permitted.

The early years of the organic movement

The core principles of the organic movement often matched those of farmers. As noted in the book “Remaking the North American Food System,” organic farmers sought to achieve their goals through a holistic approach to farming. Organic farms were founded in the early days and focused on local markets. They also kept their operations small and revived rural culture.

The rise of industrial agriculture saw the birth of the organic movement in the early 1900s. It remained dormant for many years until a small group eco-conscious farmers formed different associations. One of them, Demeter International, began a certification program that rewarded organic farmers who followed a certain standard. Another was the Australian Organic Farming and Gardening Society. Eventually, all these groups combined and formed the International Federation of Organic Agriculture Movements (IFOAM).

The organic movement began with pioneers in the early 20th century, introducing organic farming in the United States and Europe. Although organic farming was not widely accepted immediately, it did gain a small following over the years. However, organic was not mainstream until the 1960s counterculture movement gained momentum. By then, the Organic Foods Production Act was passed and the organic movement was officially recognized as an industry standard.

Despite its humble beginnings, organic farming has evolved to be a vital response for the food crisis. It has saved many family farms, and helped to revive others. Organic systems have won the trust of eco-conscious shoppers. Organic certification and the NOP label were also important to ensure that organic products are truly organic.

How to Grow Basil Indoors 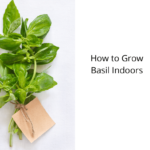